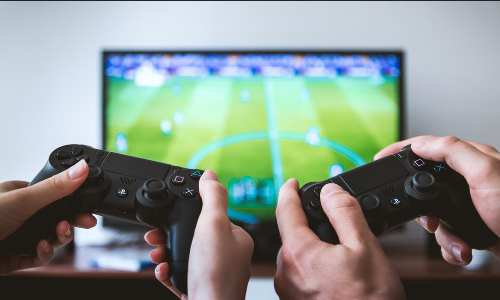 Alto’s Odyssey is one of the best offline endless runner games offered by Noodlecake Studios Inc. It has over ten millions of downloads on the play store. Your character will ski forward on its own. You have to jump, perform mid-air flips and cover as much distance as you can. Its graphics are awesome and the controls are also simple.

Asphalt 8 is another popular offline racing game that requires no internet connection as long as you download its content like maps. It is offered by Gameloft SE and has more than hundred millions of downloads on the play store. Its graphics are just incredible. Drifts and stunts are eye-catching. It includes over 75 high-speed tracks, 400+ events and 290+ cars and bikes.

Space Marshal series has three parts and all are playable without internet connection. It is of action, shooting and strategy genre. You will play as a marshal who travels from planet to planet and capture the bandits & criminals. You can use the surroundings to your advantage to take cover, stealth and lure the enemies. It has more than hundred weapons of different types.

The Room series is one of the best puzzle games ever. It has four games offered by Fireproof Games. Each part has new puzzles, storyline and mystery. You have to solve the mystery of the room to escape it. Pay attention to every part or you will miss something and never get out of there. All these parts are offline so you don’t need internet connection. Its graphics are also outstanding.

Levelhead is an action-packed game offered by the developers of award winning game Crashland, Butterscotch Shenanigans. In it, you have to train your GR-18, a new trainee, to deliver any goods under every critical situation successfully. You can also create your own level full of obstacles, monsters, switches and share with the rest of the world. It has over 90 levels and the difficulty level rises with every level.

Dead Cells is a roguevania action-packed game offered by Playdigious. You will explore an interconnected world. You will reach new levels after you die and have many skills & weapons to slay your enemies. It supports offline mode and also external controllers. It comes with auto-hit & manual hit mode. You will definitely enjoy this game.

Limbo is one of the best puzzle games offered by Playdead. It has won over 100 awards. In this game, a boy enters the limbo in search of his sister. The whole game is placed in a black & white world in which many dangers, traps and deadly creatures lurk in the shadows. The graphics & sound effects are outstanding.

Badland is a side-scrolling adventure game full of action offered by Frogmid. It has more than ten millions of downloads on the play store. It also won the Game of the Year award. In it, you will explore many levels full of obstacles and traps as a forest dweller. You have to choose the right brid to control. Its sound effects are outstanding and graphics are also amazing.

Crashland is another award winning game. It is an RPG adventure game offered by Butterscotch Shenanigans. In it, your ship is derailed and you are trapped on an alien planet. Explore the planet, build your home, fight powerful creatures and tame them. You can learn many skills and secrets about the world. It also supports game controllers.

Ninja Arashi is one of the best adventure games with an awesome storyline. It has two parts. And both have more than ten millions of downloads on the play store. In this game, you will play as a legendary ninja, Arashi, whose wife is killed and his son is kidnapped by ruthless Orochi for revenge in the fist part. In its second part, he breaks free from the ice prison of Dosu, who also kidnapped his son in the first part’s ending. Go on an amazing ninja journey with Arashi.

Plant vs Zombies 1 & 2 both are offline games in which you have to strategize to stop the zombies from entering Dave’s house. It is offered by Electronic Arts with over hundred millions of downloads. Choose your plants and positions wisely to survive the zombies wave. There are 100+ plants & zombies with unique attack styles.

Subway Surfers is the popular runner game offered by SYBO Games with more than billions of downloads on the play store. Run on the rail tracks, roll, jump and dodge the oncoming trains & obstacles. Score as much as you can. You can pick up power-ups to score more points and collect coins. It has many characters, hoverboards and power-ups.

Dead Rain 2: Tree Virus is an action game offered by Tiny Devbox. In this game, you have to survive the world where a virus is spread throughout which makes trees grow in the human body. It has many stages, numerous skills and powerful bosses. Its graphics and sound effects are very distinctive. Survive in this world and use zombies’ weaknesses to kill them.

Iron Blade: Medieval Legends RPG is the best fantasy action game offered by Gameloft SE. It has numerous powerful monsters, dungeons and armies of demons. You will fight with the monsters and demons in medieval Europe filled with war & magic. It also has real world locations. You can also play it without internet connection.

Crossy Road is one of the most popular android games. It has more than hundred millions downloads on the play store. Your job is to help the chicken to cross the road & steams full of obstacles. It has over 150 playable characters. You can play it without internet connection and also multiplayer mode. It supports Android TV too.